WE BORROW THE EARTH AND PATRICK JASPER LEE REBIRTH

Posted by Jasper Lee on Thursday, July 25, 2013 Under: romani gypsy aspie
We Borrow the Earth and Patrick Jasper Lee are being republished! Ravine Press - thank you. It's been a tough ride for both of us, a journey through thirteen years since its first publication by Thorsons, to its latest publication by Ravine Press.
The first time round my relationship with this book wasn't exactly a marriage made in heaven, even though I was overjoyed that I was being published. As a fiction writer, it was a challenge to write about my Romani gypsy culture - considering most of my family didn't think it a good idea at all - but it was an exciting prospect to think someone - chiefly the world - was at last taking me seriously as a writer. I didn't particularly want to write this book, but I believed at that time that it would be a step in the right direction, where I might also be accepted as a fiction writer.
The larger Thorsons and the smaller Ravine are two very different animals, and both live in two completely different dimensions. The first is a hefty giant which throws its weight around like any ogre would, because it is so big it can do just about anything it likes, while the second is a smaller, somewhat transparent otherworldly being, sitting quietly on her rock, waiting for her moment to arrive; she has all the power minus the roar, and she is by far the more acceptable of the two, even though the first will promise you gold.
There is no gold. That's the bottom line. The giant just pretends he has gold and that you are going to get some of it as he dangles it before your eyes. Truth is this giant did very little to help me and my book along, and conversations with other authors soon caused me to believe that larger publishers weren't all they were cracked up to be because they weren't doing a thing to promote new authors.
When I arranged my American tour to promote We Borrow the Earth, the publisher did absolutely nothing. I was given a Thorsons American contact who said, 'Hallo!' and that was about all she said. Silence and tumbleweed meant I had to do absolutely everything myself, which I didn't mind, of course, but what are these hefty giants of publishers for? Aren't they supposed to do a little more than sit on their huge bums?
The joke didn't stop there. When I asked for flyers to advertise the tour (which they said I could ask for) I was given some thin cheap bits of blue paper containing a bare minimum of words, crookedly photocopied and very badly designed. I have seen jumble sales advertised far more professionally! 'Unless you're Geoffrey Archer,' my lit agent kept saying to me at the time, 'you can't expect much else!' She was no help either!
After that came the thirteen-year journey, until now, when We Borrow the Earth and Patrick Jasper Lee are being republished. People who got to know Patrick Jasper Lee through knowing We Borrow the Earth are, I hope, going to stick around long enough to see exactly who this author is and what he is really all about, and they will also hopefully see what might have transpired had the hefty giant done its job. Publishing Take Two!

There is a greater sense of freedom now in me, and this is because thirteen years, I suppose, have at least offered me that vital maturing process. I haven't stopped writing in all that time. The cogs have been churning. So there are shelves and shelves - well, almost - of books already written, stacked, and waiting to appear. The fact that I have Asperger's also means that unfortunately when I write, I write like a bit of a machine, so don't expect me to stop at any time soon. The new Patrick Jasper Lee, the one who no longer listens to hefty giants, is here to stay. 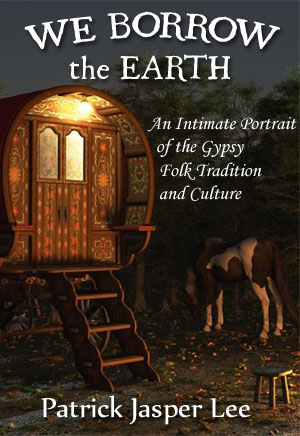