TANGLED DREAMS: Our Need for the Otherworld and the Romani Shaman

Posted by Jasper Lee on Tuesday, January 21, 2014 Under: Romani Gypsy

‘We live within the knots of our tangled dreams, rarely emerging

from the depths we painstakingly create for ourselves.’ 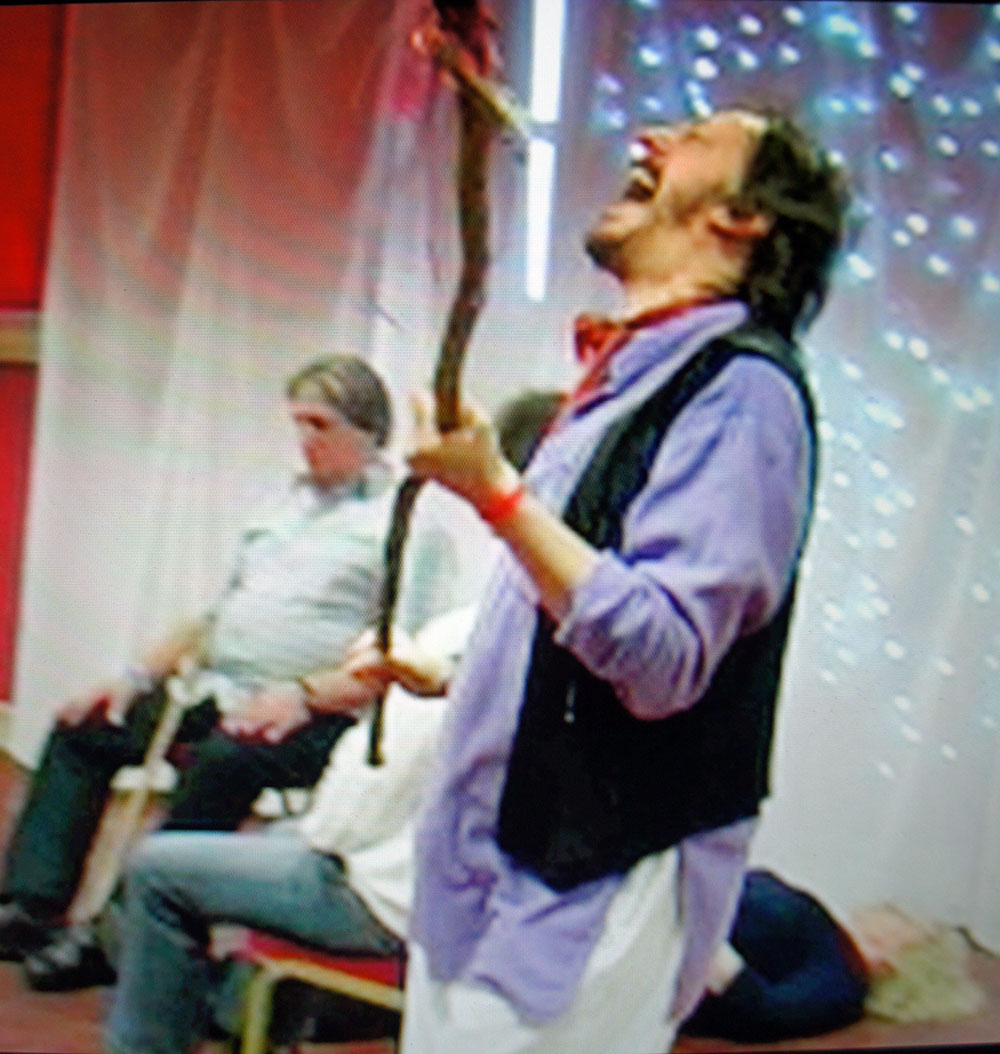 In the accompanying photograph I am performing a shamanic healing ritual at The Goddess Show in Brighton, which took place around five years ago. It was a public affair, and although you can’t see them, there was quite a large audience watching the ritual up on the stage. The people with me, some sitting, some lying down, had all come up to join me on the stage because they had troubled bodies, minds and spirits, and they trusted me to do my stuff and help them.

One cannot help but feel a touch evangelical when one is ‘performing’ a ritual in this kind of setting, because it is, if anything, boisterous, and probably even moderately scary for some of those who are witnessing it. Noisy, emotional, and unquestionably dramatic, it is certainly not what anyone might expect of a healer practising his ancient craft. Generally, though, it is the only way one can reach the state of the human mind today when most, if not all, of our problems have been unmercifully stuffed into the darker labyrinths of our inner worlds. We are not at fault for developing such complex inner worlds, for it is actually all we can do when life is, emotionally, so much harsher now than it ever was in earlier times. One’s inner world, however, is far more noticeable from the otherworld than it is from here in our physical world. And it was actually always like this, so the roots of our problems end up residing within a world of dreams, and the effects, the emotional discord, ends up being closer to the physical world than it is to the root of the problem, which has somehow disappeared into the world of dreams.

You might be tempted to cast your mind back to those earlier times of the Romani Gypsy Chovihanos of old, busy performing their healing rituals in the depths of Eurasian forests. Well, if anything, we Chovs have always been dramatic and unafraid of primary human emotions, but the truth is that we never before had to take on so much pain, grief, loss, despair, resentment, frustration, anguish, misery, and conflict, such as people suffer today. People’s problems are now so intense in our modern times, purposefully hidden, or disguised (again through no fault of their own), that the resulting interpretation, when expressed by the Chovihano, is anything but mild, and a conflict of interest, between one’s personal life and one’s social life is ordinarily opened up, with the soul being trapped in the dream world, at the heart of all the troubles.

During the healing process the Chovihano will have entered the place of the individual’s dreams, where the raw emotions remain unnoticeable in everyday life. And yet they are screaming out in the dream world, for none of us can stop our dreams, and in the otherworld they are all too noticeable. It isn’t easy for the individual to express such emotion, understandably, when conflict, anguish and trauma are at a height; in fact, it is far easier for the Chovihano to do it on behalf of people who are suffering, as he is far more in touch with emotion than they are, and ultimately far more in touch with the dream world; he is also objective, so his shamanic ability can reach out and touch something which others can’t.

This becomes a ritual theatre situation, as we find ourselves entering the place of the individual’s undiluted and fully concentrated self, which has now suddenly become visible on a purely emotional and spiritual plane. The unseen is unseen no longer as the dream world collides with the physical world. Here we will discover no information, no record of experience that apparently seems to have caused the dreams to become ‘polluted’. Here, there is only the summoning of the emotion, back to earth from the otherworld, where the person’s unexpressed sickness and troubles would have been stored, keeping the soul prisoner. It is like having an annoying gremlin or monster stuck in your kitchen cupboard, and you fear opening the door of that cupboard for what may end up leaping out at you! The Chovihano dares to open that cupboard door, and knows nothing of the cause of the problem – he doesn’t have to unless the healing process also involves counselling.

The Chovihano expresses the resulting intense emotion he is making contact with. It is like thunder, like an earthquake, like a volcanic eruption (which is how some actually describe their buried feelings); it is like the earth has cracked in half, at least for the Chovihano. The recipient will feel it going on, but it has become distant in a more merciful way; rather than distance through emotional burial, this is distance through expression, which the Chovihano is doing on the person’s behalf. Here dream world meets physical world. If I were to describe it, it isn’t unlike the Big Bang, and the beginning of a brand new universe for the individual undergoing the healing. Here we realise just how much we live within the knots of our tangled dreams, trapped by them, rarely emerging from the depths we painstakingly create for ourselves.

The individuals seeking healing remain seated or lying on the floor during these ritual healing sessions (as in the photo), while the Chovihano walks about among them, registering their grief and pain and expressing it fully, unforgivingly, on their behalf. The pain must be expressed in such a way in order to leave; the monster must be pulled from the cupboard. This is no pretence. This is not a joke. This is full-on shamanic expression, Romani-style, as you may never have witnessed it before.

‘It is like something straight out of Macbeth!’ one person said to me, after experiencing a healing ritual demonstration. Those receiving healing may just feel emotionally moved, and certainly relieved while the Chovihano is at work, as he moves through a whole range of primary emotions on the individual’s behalf, emotions whose roots are likely to have travelled deep through the labyrinths of each individual’s soul, entwining themselves with the individual’s dreams. It is like a stubborn weed strangling a plant or a tree. But if the emotions are released from the knots of dreams, then the individual can begin anew and healing thereafter will gradually take place. In fact, with some steady constructive counselling, the individual is likely to be left quite clean, and will learn to express the emotion that can be brought about by ordeals, sooner rather than later in the future.

Incidentally, the man in the picture who is sitting with his stick, got up and danced to some music with others after the healing session had finished, which he hadn’t done for a long time! Others cried, not with distress, but with relief, because the feeling of release was so welcoming. Many can be deeply moved through these sessions.

But what we can all do if we want to help anyone, is encourage them to open up to their confusion and conflict, which may have shifted itself to the land of their dreams. There, the more positive dreams will sit in the kitchen cupboard, waiting for their time to arrive, waiting with the monster, ruled by the monster. ‘Don’t you dare go out there, because I won’t let you,’ the monster will be saying to the positive dreams.

As a healer I reassure people, help them welcome in the good after fearing the bad. These healing rituals aren’t unfamiliar processes. We after all allow such a healing measure to occur whenever we sit down to watch a good movie, read a good novel, or even watching a soap. It is normal for us to identify with a character’s suffering, pain and problems, and we can feel we’re suddenly liberated when a character touches our hearts.

The Chovihano is more necessary now in society than ever. If the trapped primary emotions are not released here on earth, they may well travel with us to our dream world both here in physical life, and also to the afterlife. We need to get busy releasing the knots of our tangled dreams, and that is what as a Romani Gypsy Chovihano, practising in the old shamanic way, I am constantly helping people to do.

If you would like Patrick Jasper Lee to give a talk and demonstration on the Romani Ritual Healing process at your event, please contact him on his website, or keep in touch for events where demonstrations will be held.

Join Jasper on his online programmes in Romani culture and the arts!